Panatom Gallery is featuring Nicolas, Angela, Silvia, Muammar, Barack, Hugo and some more in Victor Brangoleau's "Signatures". We invite you to the exhibition opening on March 16th at 7pm.

Remarkable curves evolve, when Victor Brangoleau takes possession of foreign signatures and enlarges them. Being abstracted from their materiality (paper), and function (the statement of agreement), they become stylized, wooden objects. These are the signatures of internationally established politicians, that are faked and manipulated by Monsieur Brangoleau.

This raises questions about personal and political authenticity. Without any excessive respect but a fine sense of humor, Victor dismantles the signatures, questions political responsibility and becomes an offending perpetrator. He's entering a fight for power with the legislative!

Indeed, one new form that Brangoleau chooses is highly ironical: he designs flags, representing and glamorizing a statesman's name like a branded sign. He obviously recomposed the wooden forms into their original state and used them as stamps. Together with a minimalistic, character-based symbol, this signature is displayed on the flag. If this doesn't imply a desire for authority?

On the night of the opening, the visitor is also invited to pursue the act of faking with his own hands. How does it feel like to be Obama or Merkel for a moment? The artist will be present.

On the occasion of the exhibition the flag "Sarkozy" will be for sale as a limited edition of 30, 2 color screen printed on pipeline cotton, signed by the artist.
Buy now 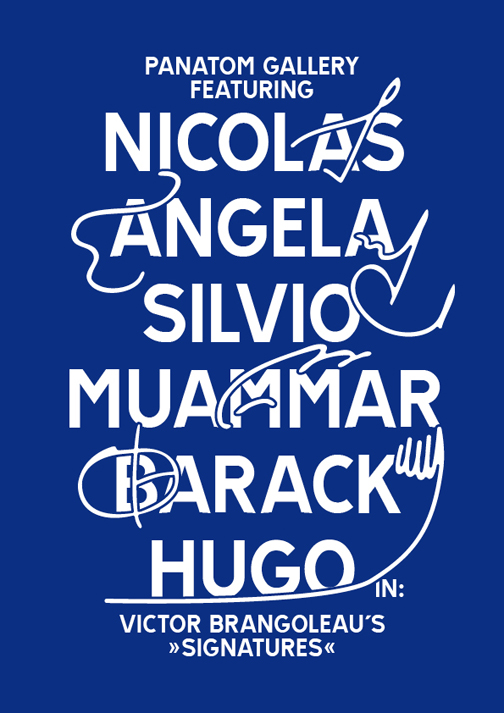